A year ago, the European Union was heading towards a second period of strict lockdown measures to protect its population from the coronavirus. Now there is hope: several effective COVID-19 vaccines have arrived. But not for everyone.

By September 2021, the richest nations, which make up just 13% of the world’s population, have administered 90% of all available vaccine doses. Only 2.3% of people in low-income countries have received at least one dose.

The sheer extent of the inequity in countries’ access to vaccines lies in stark contrast to the scientific achievements of developing one, and will likely be looked upon as the single largest failure of the Covid-19 pandemic response. This was the clear message from United Nations secretary general António Guterres, who told the UN General Assembly this week: “We passed the science test, but we got an F in ethics.”

Ensuring fair and equitable access to safe vaccines and treatments is one of the biggest challenges of these times.

That’s why 375 European organisations support the European Citizens Initiative No Profit On Pandemic. Together, they have the ambition to encourage one million European citizens to sign a legislative proposal to the European Commission.

The European Union has ordered sufficient doses to vaccinate its population twice over. While it is understandable that countries want to protect their own populations, this should not be at the detriment of the rest of humanity. To overcome a global crisis, cooperation must be put before competition.

We are committed to this fight. And every one of us can take action by supporting this critically important initiative, launched in November 2020, to put global health before pharmaceutical profits.

The European Citizens’ Initiative: No profit on the pandemic

What is a European Citizens’ Initiative?

EU citizens have the right to address the European Commission directly via a European Citizens’ Initiative (ECI) in order to propose a concrete legislative amendment. When the petition collects one million signatures in at least a quarter of the EU Member States, the European Commission is legally obliged to respond to the demands. In other words: this is a powerful democratic tool.

Why a European Citizens’ Initiative on vaccines?

Even before the start of the vaccination campaigns in Europe, lack of transparency regarding the European Commission’s contracts with pharmaceutical companies had been an issue. Despite the enormous amount of public contributions to the research and development of safe and effective Covid-19 vaccines, there are very few controls and conditions demanded in exchange for all these billions of taxpayers’ money. Even more, it had already been clear for several months that the richest nations were monopolising future doses to the detriment of the rest of the world’s population.

On 30 November, 2020, a number of European organisations, NGOs, trade unions, healthcare associations, political parties and student movements. launched an ECI Together, they hope to mobilise one million European citizens to obtain an answer from the Commission regarding a fair access to the vaccine.

No. 1: Protecting everyone equally

In May 2021, the World Health Organization’s director called the current unequal access to Covid-19 vaccines a situation of ‘vaccine apartheid’. We’re in a two-tier system that leaves millions of people without access to vaccines. By September 2021, the richest nations, which make up just 13% of the world’s population, have administered 90% of all available vaccine doses.

If this trend continues, the poorest countries will simply not be able to vaccinate a sufficient part of their populations by early 2023. At the current pace, some might even need another 57 years to get a 75% vaccination rate!

Facilitating access to vaccines for all those who need them is not only a matter of justice and equality, it’s also a matter of common sense in the face of a global epidemic. In a world that is increasingly interconnected economically, politically and socially, allowing transmissions and deaths to continue exacerbates the impact of the global pandemic for everyone. We will only end the crisis once the spread of the virus is controlled around the world.

No. 2: Ensuring transparency and restoring confidence 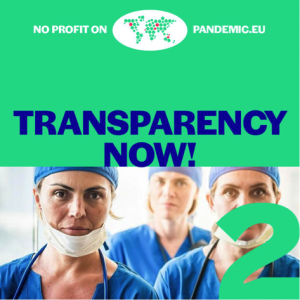 A lot of mistrust has been expressed about vaccines that are one of our best hopes for emerging from the pandemic. The unprecedented speed of their development, often based on new innovative technologies, has provoked legitimate questions from members of the public. Their concerns must be answered with the utmost transparency.

However, the European Commission, which has received a mandate from the EU Member States to negotiate with pharmaceutical companies, remains dangerously opaque. We demand transparency about the contracts signed with the pharmaceutical companies: on the prices, on the amount of public funding used for the development of these vaccines, on the conditions discussed in the contracts and on the results of research and clinical trials. This is a non-negotiable step for restoring the trust of citizens.

No. 3: Demanding public control over use of public money

Since the onset of the health crisis, governments around the world have mobilised nearly US$10 billion in public funds for research and development of vaccines and other treatments against COVID-19. Sanofi, the leading French pharmaceutical company, has received €200 million from the French government and US$2.1 billion from the United States to develop such a vaccine.

But there are very few controls and conditions in exchange for all these billions. Pharmaceutical companies remain free to set their prices on vaccine doses, which range from US$3 to more than US$30 per dose. The US company Pfizer, whose vaccine was developed with Germany’s BioNTech and one of the first to be administered, could make a profit margin of 20-30%. The pandemic turned their CEO, Albert Bourla, into a billionaire. At a time when an average 8500 people are still dying every day of COVID-19, and up to 500 million people worldwide could be pushed into poverty due to the economic consequences of the pandemic, such profits are unethical and harmful.

No. 4: Putting Cooperation before Competition 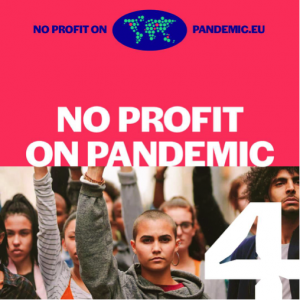 Faced with a common challenge, we will only be able to overcome this crisis if we develop a common response based on the broadest possible cooperation. Many of us are contributing by making sacrifices on a daily basis. But the status quo of competition between the major pharmaceutical companies has not yet made a similar sacrifice. This competition is possible because of the patent system and the intellectual property rights that guarantee pharmaceutical companies that develop treatments or vaccines a monopoly on their production, marketing and pricing. Right now, for example, despite the enormous need for vaccine production, only Pfizer has the right to produce its vaccine for the sole purpose of guaranteeing its profits.

This is the same system that has for years prevented millions of people living with HIV and AIDS from accessing life-saving treatments. This system must be challenged to allow all countries with the capacity to produce these vaccines to do so. This is especially important given that their development has been largely enabled by public money. Steps have been taken by India and South Africa at the World Trade Organization (WTO) to suspend intellectual property agreements. But the rich countries, led by the EU, have been opposing them for months. Since last summer, the WHO has also developed the C-TAP platform to allow the pooling of intellectual property rights. But no company or research institutions has yet voluntarily agreed to participate. The pooling of intellectual property rights would greatly increase production capacities and thus potentially accelerate vaccination campaigns in the rest of the world. As highlighted in Nature in March: “Arguably the strongest argument for a temporary waiver is that patents were never designed for use during global emergencies such as wars or pandemics.”

Are the benefits of pharma companies really worthier than our lives and health?

Current levels of donations will not provide the number of vaccines needed and will serve only to deepen a power imbalance between rich and poor countries built on paternalism and dependence; the foundations of colonialism. Relying on donations to achieve global vaccine equity is an absurd situation, when we know that India produces 65% of all vaccines worldwide, but doesn’t get a permit to make Covid-19 vaccines due to intellectual property barriers.

The opportunity to access vaccines has been unequal for countries in the Global South from the outset. Those wanting to buy vaccines were outcompeted by large Global North powers. Covax was set up with the aim to vaccinate healthcare workers and vulnerable groups in low-income countries this year, but donations from participating nations (who may have received vaccines from Covax themselves) have fallen markedly short of their pledges.

Barely 15 percent of the more than 1 billion doses that high-income countries promised to donate have arrived in Africa. COVAX is half a billion vaccines short of its already modest target. Worse, the EU imports more vaccines from Africa than it donates in net terms. Research by the New York Times reveals that Johnson&Johnson has been pressuring the South African government to export vaccines to the EU, while it was one of the largest hit countries by this disease.

People have the power

When we reach one million signatures, the European Commission is legally bound to respond to our demands for transparency, accountability and equal access to these vaccines. Together, we can make sure that everyone, everywhere is safe. Because no one is safe, until we are all safe.

Sign the European Citizens’ Initiative today by going to www.noprofitonpandemic.eu
Share it with as many contacts as possible.